A highway paved with recycled diapers may change the cloth vs. disposables debate

We thought it’d be worth preempting the obvious question even before describing how, in what might be a world-first, more than 100,000 dirty, disposable diapers — or “nappies,” as they are called here — are being used to help pave a road in west Wales.

This is a pilot project with intriguing environmental implications. A proliferation of diaper highways could reduce landfill waste — and influence parents around the globe weighing the vexingly difficult decision between cloth vs. disposables.

These particular diapers were rinsed — thoroughly, don’t worry. Then shredded into fibrous gray pellets and mixed with asphalt that a work crew clad in bright orange slathered over a 1.5-mile stretch of winding highway this week.

“You’re not sure what to expect when you turn up to a nappy road,” said Ben Lake, a politician who represents this area in Britain’s Parliament. But, taking a deep breath as he strolled alongside the freshly paved, still glistening road, he pronounced: “It smells like — road.”

Lake said the nappy road “could be a game-changer for how we approach infrastructure in Wales,” and while people could still be encouraged to shift to cloth diapers, this nonetheless helped to tackle the “here and now” problem of a mountain of disposables thrown away every year.

Small gray pellets made from shredded diapers have been added to the asphalt. (Karla Adam/The Washington Post)

About 140 million disposable diapers are tossed in the bin annually in Wales. In Britain as a whole, that number is estimated at 3 billion, accounting for 2 to 3 percent of all household waste. In the United States, about 50 million diapers are being stuffed into Diaper Genies and the like each day, for a total of more than 18 billion a year. The majority of those end up in landfills, where even the ones billed as biodegradable can take years to break down.

Cloth diapers have environmental costs, too. Making them and washing them consumes energy and water. A report by Britain’s Environment Agency regulator in 2008 found that environmental impacts of using cloth nappies could be higher or lower than using disposables, depending on how they are laundered.

Efficient washers have shifted the equation in favor of cloth. But diaper highways could change some people’s thinking once again.

Jason Hallett, a professor of sustainable chemical technology at Imperial College London, said paving with recycled nappies wouldn’t “make the roads greener,” since both asphalt and plastic diapers are made of hydrocarbons. But a diaper highway “arguably gives more options for end-of-life uses for plastic in nappies, therefore it makes those products less environmentally damaging.”

Several countries have experimented with roads made with plastic garbage. India led the way — glue made from shredded plastic waste has been holding together a street in Chennai since 2002, and since 2015 the Indian government has required road construction in populous urban areas to incorporate plastic waste. The Netherlands, a country of keen cyclists, opened the world’s first bicycle path made with recycled plastic. And California used discarded plastic bottles and other packaging to repave a three-lane stretch of highway.

But Wales believes its road is the first made from diapers.

NappiCycle, a Welsh company that supplied the pellets for the trial, is one of only two diaper recycling companies in the world. (The other is in Italy.)

Director Rob Poyer said diapers are difficult to break it down into plastic, cellulose and super absorbent polymer parts. But perhaps the biggest challenge for potential recyclers has been finding a market for the output left behind. Poyer said recycles about 40 million disposable nappies a year and has used the fibrous pellets to make construction panels, pinup boards and coasters.

“We have to be innovative and broaden our mind into what we do with the end uses of our materials,” he said, as he nodded toward a dump truck loaded with hot asphalt mixed with diaper pellets. “We are too quick to disregard things and put them in the bin.” 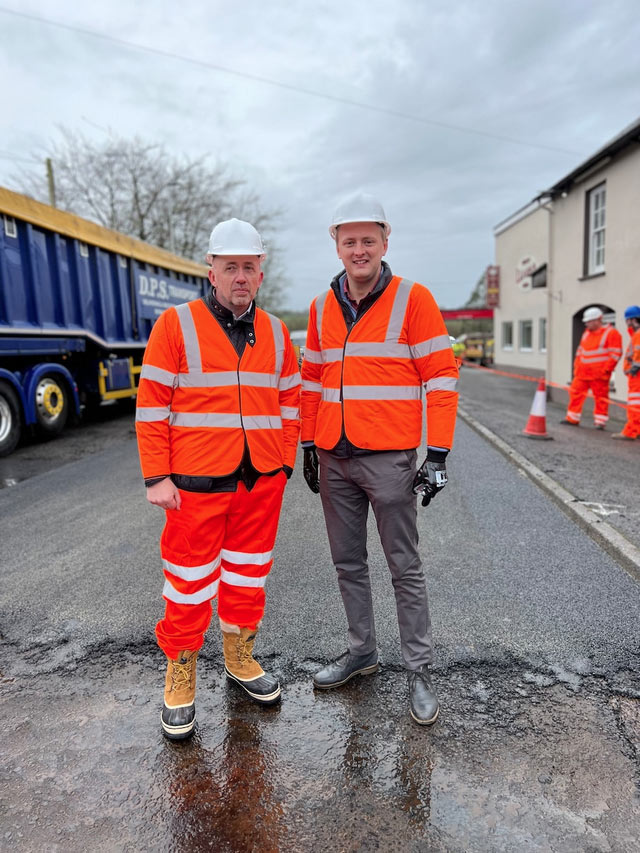 Some areas in Wales ask households using disposable diapers to set them out in a separate bin for collection each week. It’s still cheaper for local authorities to take the diapers to an incinerator or landfill than to send them to Poyer’s plant, he said. But some still do. Nappy recycling is “viable because the Welsh government wants a green economy,” Poyer said.

Wales — a semiautonomous nation of 3 million people — has been more creative than most with its recycling policies. And along with Germany and Taiwan, it is among the top recyclers in the world.

Analysts say what really drove up rates were statutory recycling targets, and a threat of hefty fines if they aren’t met. Local authorities have flexibility on how to meet those targets. In Swansea, for instance, officials carry out what they call “clink tests” — they go around shaking trash bags to see if there are any clinks or clanks, identifying recyclable objects. Culprits have to pay 100 pounds, or nearly $140.

Other Welsh towns have slashed the frequency of trash pickups, while maintaining weekly recycling and food waste collection. The first place to introduce once-a-month rubbish collection — and not without howls of protest — was Conwy, a region in the north with a striking medieval castle. Since that move in 2018, Conwy’s food waste collection is up 31 percent and the recycling of dry materials is up 16 percent. The region recycles more than 70 percent of household waste.

Jim Espley, a waste manager at the Conwy county council, said initially people were worried about “smelly bins and maggots.” But he insisted that it’s manageable, as long as people keep organic material — like food and nappies — out of their bins. 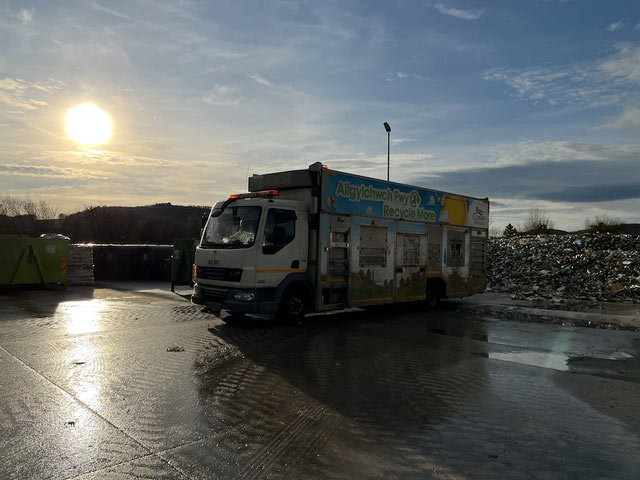 A recycling truck in Conwy, Wales, where more than 70 percent of household waste is recycled. (Karla Adam/The Washington Post)

Food waste typically makes up about a quarter of household garbage. But most Welsh residents plop their food waste into a caddie, which is collected weekly and taken to an “anaerobic digestion” facility, where it is turned into renewable energy or used as fertilizer.

Attention has now turned to what to do with nappies and other absorbent hygiene products, which make up about 9 percent of trash.

If Wales authorities end up happy with the diaper highway experiment — if they determine the asphalt isn’t compromised by the addition of nappy fibers and meets environmental standards — there is scope for the recycled diapers to be used more widely. Mountainous Wales has more than 34,000 miles of roads.

This week, government testers parked a white van alongside the nappy road and took samples to be analyzed.

In the case of other plastic roads, there has been some worry about the possibility of microplastics getting into the soil and waterways. But Hallett played down that concern, saying diapers would likely leak more microplastics when thrown into landfills.

Locals in Llanarth seemed amused that the world’s first nappy road was on their doorstep.

“That’s one way to get rid of it,” said Luke Steer, 25, who was oblivious — until informed by a Washington Post reporter — that he’d just driven over pavement made from recycled diapers. Steer said his toddler wears disposable nappies.

“It doesn’t bother me, as long as it does the job,” said Sam Vaux, 30, who runs an auto repair garage next to the nappy road. “Apart from the rumors flying around that the road is made out of recycled nappies, apart from that, you wouldn’t know any difference.”